The Helicopter Emergency Egress Device 3 (HEED 3) manufactured by Submersible Systems, LLC. is a compact, lightweight and reliable self-contained breathing apparatus. The HEED 3 is designed to increase the survivability of military and commercial personnel in short-term out-of-air emergencies.

All HEED 3 Cylinders are available with either CE or DOT tank markings.

The HEED 3 is known throughout the world as the leading emergency breathing apparatus for egressing from ditched helicopters or smoke-filled environments. Wherever there is a short-term out-of-air emergency, HEED 3 is “There when you need it.” 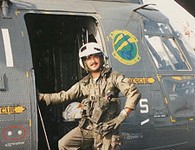 “Having that HEED III was probably the most important piece of equipment that I used that day, because it gave me three important things. It gave me confidence, time and it performed flawlessly inverted, in rough seas and jet fuel.”

“A Marine from First Marine Expeditionary Force drowned when the High-Mobility, Multi-purpose Wheeled Vehicle (HMMWV) he was riding in rolled over into a canal in South-Central Iraq. 29 March 2003.” from www.history.navy.mil

There are no reviews yet.